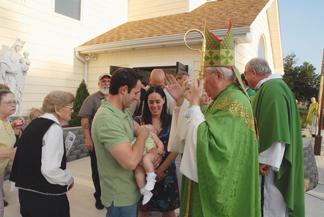 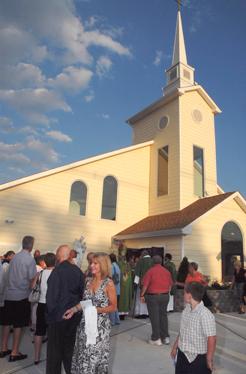 Traditional Feel - The goal of the modifications to St. Catherine was to produce "a very traditional looking colonial church," according to pastor Father Daniel Hesko.
Photos by Dave May

Looking at St. Catherine Church now, it’s hard to imagine the building as it once stood on the bucolic landscape of Middletown.

Historical traces of the old structure known as “Kilpatrick’s barn and carousel” purchased in the 30s by a small community of faithful and converted for worship are there to be found, if you know where to look, says Father Daniel Hesko, pastor of St. Catherine Parish.

But the rustic charm of the little house of worship that emerged slowly in the decades that followed has been recharged by an early 21st century renovation designed to preserve the colonial character of the original even as it doubled the size of the worship space.

On Sept. 5, parishioners turned out to celebrate this accomplishment with Bishop John M. Smith who came to “bless the church and the people,” Father Hesko said.

He described the festive occasion as the perfect culmination of the ongoing building project that had been somewhat “start and go” for five years.

“We spent years working on the building project,” Father Hesko said. “There was delay after delay. After many years, we raised enough money to enlarge the church,” he said. “Now after all the time and all the work, we have a beautiful space.”

The project consisted of “removing the entire front of the church and extending the interior, doubling its length forward,” he said. “We were able to add on a beautiful gathering space, more pews, a sound proof cry room and an upstairs balcony which gives us auxiliary seating. We used to have seating for 300. Now we have seating for 600.”

This is a great relief for parishioners, Father Hesko said. “We needed to expand. The church was always too small. One the weekends we had to have six or seven Masses to accommodate a growing parish.”

Handicapped access was provided for rest rooms and a ramp is situated so that vehicles can pull right up to the church, making it as easy as possible for disabled parishioners to come and go.

Father Hesko said this was only the latest in a long series of efforts to turn the old structure into a fitting spiritual home.

People started coming to the site for worship in the 1930s when priests from St. Ann Parish in neighboring Keansburg came to celebrate Mass in the summertime.

In 1948, Father Francis P. Gunner was appointed first resident pastor. It was Father Gunner who took the first steps toward remodeling the church building and fitting it with furnishings mainly acquired from other parishes – including the main altar from Holy Cross Parish, Rumson – which may make it the oldest altar in continuous use anywhere in the diocese, Father Hesko said.

“Father Ted beautified the church more and did some updating…When I came along, we realized the church needed to be refreshed.”

The ongoing work revealed some hidden historical treasures, he said. When the original ceiling was taken down to make way for a cathedral ceiling, the carousel gears were exposed for the first time in decades, he said.

Other restoration work solved a mystery that had intrigued pastors and parishioners for years.

The parish name saint was Catherine but no one was quite sure which St. Catherine. Diocesan documents couldn’t resolve the mystery. “They just said St. Catherine,” Father Hesko said. “A few years later, we were taking down a wall and we found a closet behind it with two documents from Rome. They both said Church of St. Catherine Laboure.”

Dated in 1948, the year of St. Catherine Laboure’s canonization, the timing is in harmony with the date the parish was created, he said.

“People seem to be very happy with the result,” he said. “The whole appearance has changed. We were aiming for a very traditional looking colonial church with very classic lines and it seems we succeeded.”